I eat my veggies.  My crisper drawer never runs out of them.  Usually steamed or baked in the oven with garlic, salt, pepper, and a drizzle of walnut oil, they are never forgotten.  When the hunger pangs hit, a hodgepodge of the usual participants are thrown into a bowl and clumsily tossed together with the all-too-familiar dressings.  Sure it tastes good or else I wouldn’t be eating it, but I never put any thought or time into this quick-fix meal.  From perusing through a multitude of food magazines, websites, blogs, etc, I am noticing the common theme of “less is more” when it comes to salads.  It’s not about how many different vegetables I can add in, rather how well just a few can mesh together.

Having been born and raised in Korea and growing up in the States under my father, who complained of indigestion if he didn’t have his rice and soup, and my mother, who only knew how to cook Korean, salads didn’t have a chance at our table.  So although having salad as a meal was unheard of before, I want it to be frequently at the center of the table in my house.

Naturally, I find myself setting a goal, which is to try a new salad each week, using fresh, in-season ingredients.  To start, I’m arming myself with recipes collected from various sources to guide me along.  Over time, I hope to be able to look at certain produce and create something magical off the top of my head.

For this week, I knew I wanted to use beets as I saw them in abundance at the Farmers Market that we go to every Saturday morning.  I scoured each and every stand for the freshest looking produce.  Hungryman stood at a distance hoping I’d let him get his tacos.  Kona sniffed…humans and dogs alike. 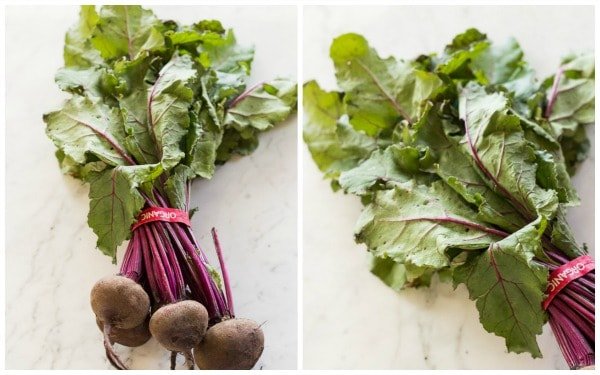 So about beets…  I adore them even though they stain my fingers.  I like to roast them in walnut oil and keep them on hand for easy snacking.  As for the beet greens, I’ve never really messed with them.  The inspiration for today’s salad is from this recipe by Epicurious.  Instead of baby lettuce, I used beet greens.  I also added farro (completely unplanned) at the very end when I saw how much the beet greens had cooked down.  It was def not going to cut it as a main dish without the addition of some whole grains.

Here’s what I did…

Step 1) Beets were roasted following these steps.  It took about an hour for the beets to be done.

Step 2) While they cooled, I washed and cooked the beet greens.  I wanted the least amount of nutrients to leach out into the water, so instead of boiling them like the recipe instructs, I cooked them in the pan for about 5 minutes with some olive oil.

Step 3) As I had mentioned, the addition of farro was so spur of the moment that I had to cook it after all the ingredients were ready to go.  Next time I will be sure to cook it while the beets are roasting to save time or add in some spinach or kale to “bulk up” the salad.

Step 4) Throw all the ingredients, except for walnuts and goat cheese, into a large bowl.  Whisk together the dressing, pour in, and gently toss everything to coat.  Be aware that the beets will turn the salad pink.  I thought it looked gorgeous, but if you are disturbed by it, add the beets on top at the very end. 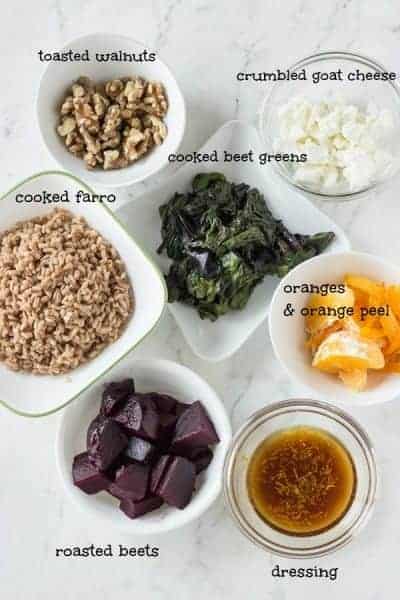 I’m working on mastering my mise en place.  Can you tell? 😉 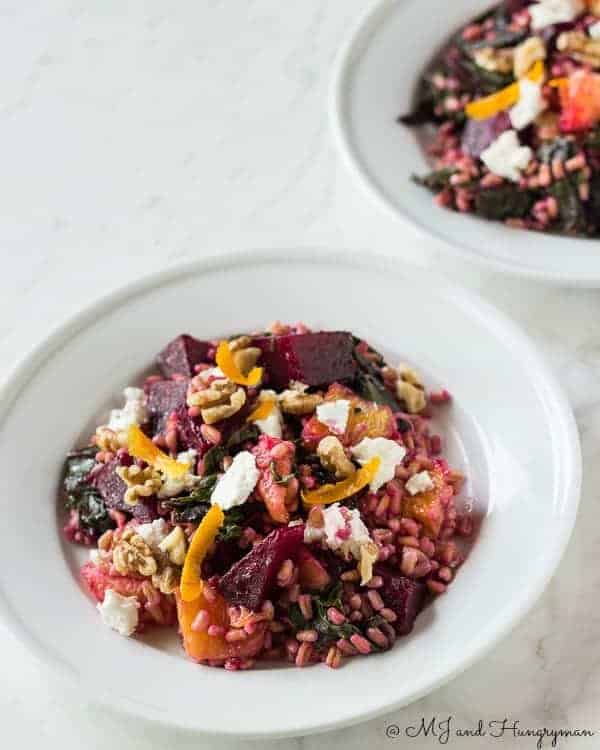 To be quite honest, after tasting the cooked beet greens alone, I thought this salad was going to be a bust as they were quite bitter.  So you can imagine my surprise when I took that first bite of the finished salad.  It was fabulous!  The key ingredient was the orange.  The bright, citrus flavor really counterbalanced the bitterness of the beet greens and complemented the tanginess and saltiness of the goat cheese as well as the nuttiness of the walnuts.  This orange, farro & beet salad was pretty simple to prepare, and I was throughly entertained throughout the whole process.  It didn’t hurt that a Korean drama was playing in the background ;). 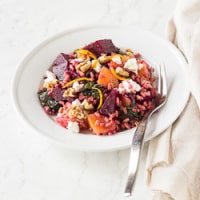 adapted from Epicurious
Tried this Recipe? Tag me Today!Tag me @KidFriendly.Meals today!