Some time ago, MJ and I stumbled upon Foxhole Culinary Tavern on one of our Target runs. We were so impressed by their delicious fare that we included it on our list of notable new openings. We’ve been back a couple of times since then, but recently got a special invite to check out their dinner menu. After mulling it over for, oh, a couple of seconds, we soon found ourselves coordinating a date with the operating owner, Ryan Wolslager, for a visit.

Foxhole is committed to using fresh, quality ingredients (locally sourced when possible), and their menu adapts to the seasons to ensure that this remains true. Texas can be felt in much of their cuisine, but their creativity compels them to come up with new, inspired dishes for their patrons. 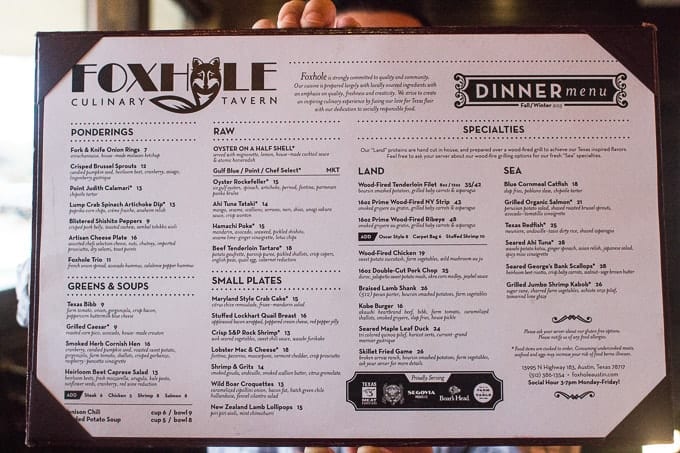 I know I haven’t even really started the recap yet, but I just wanted to point out that every time we’ve been to Foxhole the host team and wait staff have been exceptional. The moment you walk through the door you know you’re going to be greeted with a warm smile and served with the utmost respect.

We knew that lighting was going to be tricky, trying to capture food photos during the dinner hours, but with the help of Ryan and his crew we were able to set up shop in their outdoor patio. Now came the hard part. What to order… 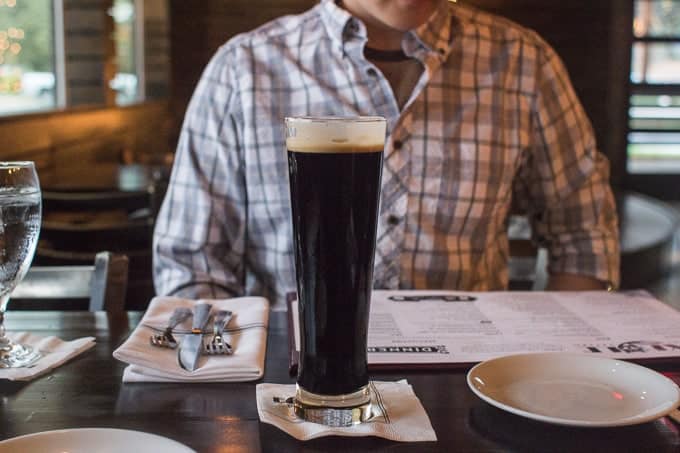 To help me in my decision-making process, I enjoyed a tall glass of 512 Brewing Company’s Pecan Porter. I just can’t get enough of this beer right now. Dark chocolate and coffee tones with a velvety mouthfeel…mmm.

We literally could have ordered any combination of dishes and ended up beyond satisfied. For example, these Crisped Brussels Sprouts… 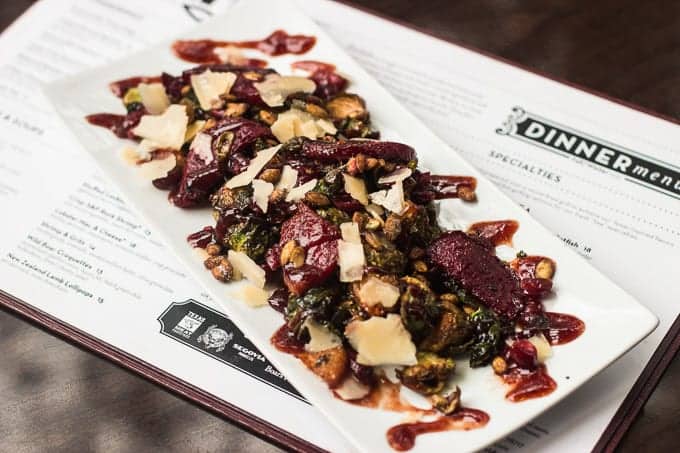 For those of our regular readers, you’ve come to know that I’m not too fond of this cruciferous vegetable. But I could NOT get enough of these! Sweet from the heirloom beets and cranberry, tangy from the lingonberry gastrique, salty from the asiago cheese…every bite was packed with flavor.

Still with our New Zealand vacation fresh on our minds, we couldn’t divert our attention away from the New Zealand Lamb Lollipops… 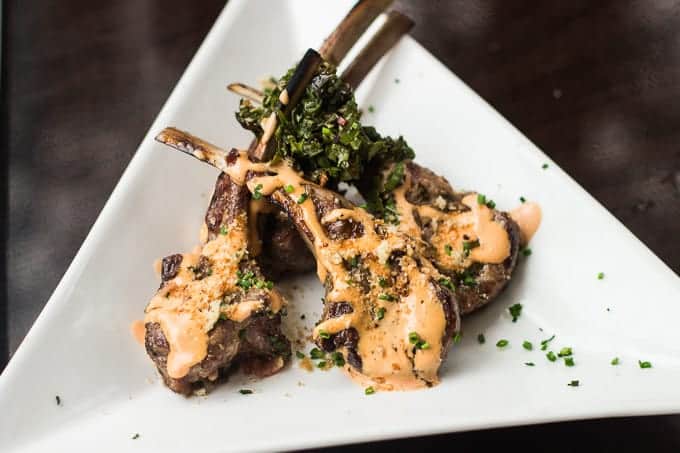 The pops were skillfully cooked and accompanied by a pleasantly spicy piri piri aioli and a refreshing mint chimichurri. The lamb was truly heightened when enjoyed in unison with the condiments. It was at this moment in the evening when I really started to get excited about the rest of the meal. 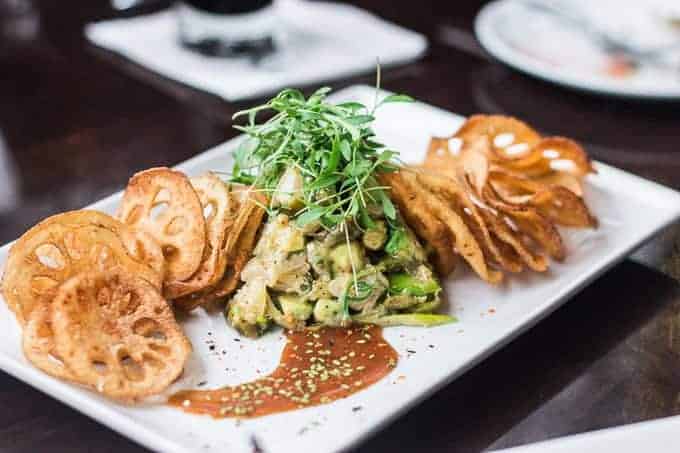 Gorgeous to look at but even more enjoyable to eat! I know I’m going to end up sounding like a broken record but the flavors, again, were spot on. The poke was vibrant and fresh and packed with meaty morsels of yellowtail.

It was challenging for me not to order the Kobe Burger (so good!!), but since Foxhole is known for their wood-fired grilling, I opted for the 8oz. tenderloin filet served with Boursin smashed potatoes, grilled baby carrots and asparagus… 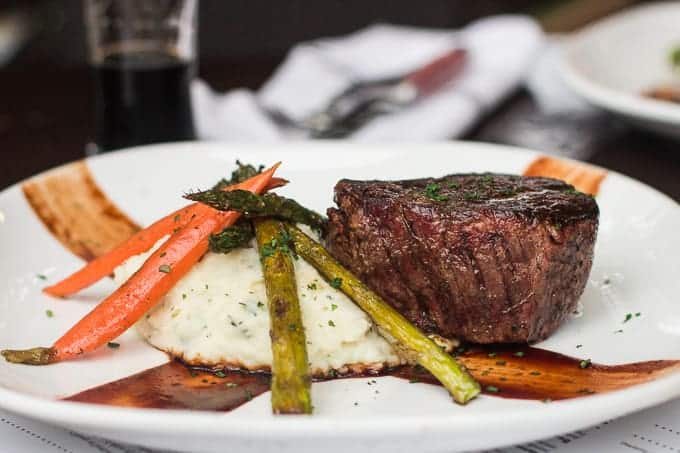 As if we hadn’t already consumed enough food, Ryan generously upgraded me to the 12oz. filet. Super tender and cooked to a perfect medium, I could’ve cut the beef using a plastic butter knife and expended minimal energy. 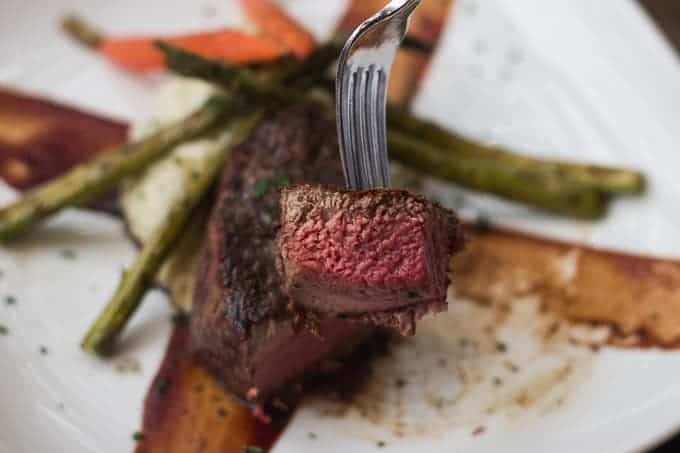 As for my partner in crime, she was mesmerized by the Smoked Herb Cornish Hen salad. She couldn’t resist all the seasonal flavors – cranberry, candied pumpkin seeds, roasted sweet potato… 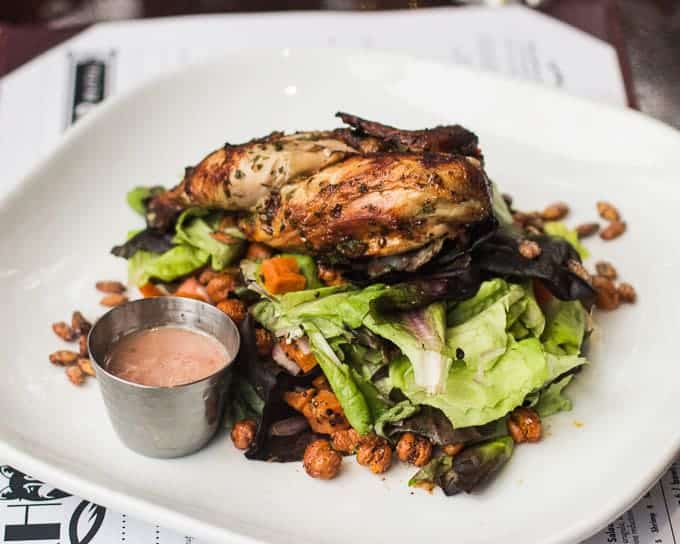 Served on a bed of fresh greens, the succulent hen was joined by farm tomatoes, shallots, crisped garbanzo beans and a raspberry-pancetta vinaigrette. Not only was the salad filled with nutritious and flavorful components, but all the different textures made it almost fun to eat. 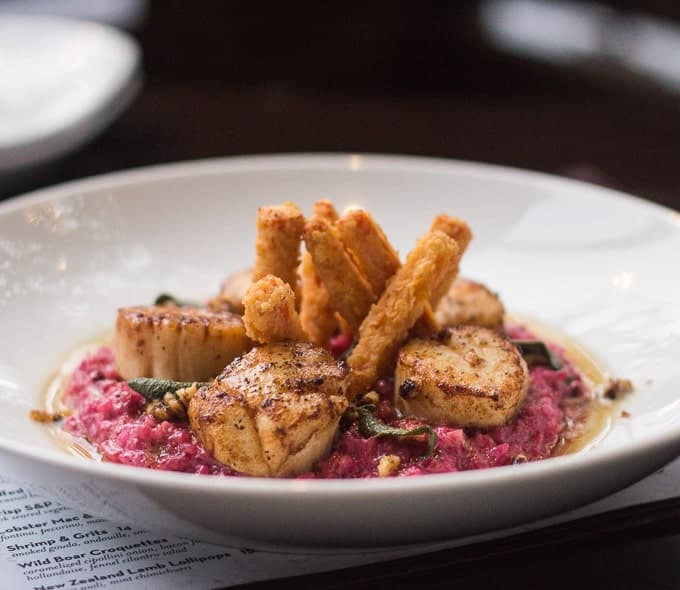 Hands down the most visually stunning plate of the night with the vivid hue imparted by the beets. The creamy risotto plus the brown butter plus the luxurious diver scallops made this a decadent dish for sure.

We were ready to throw in the towel when we were inquired about dessert. But somehow, our response of “We’ll pass on dessert” got translated to “We’ll each take one!” 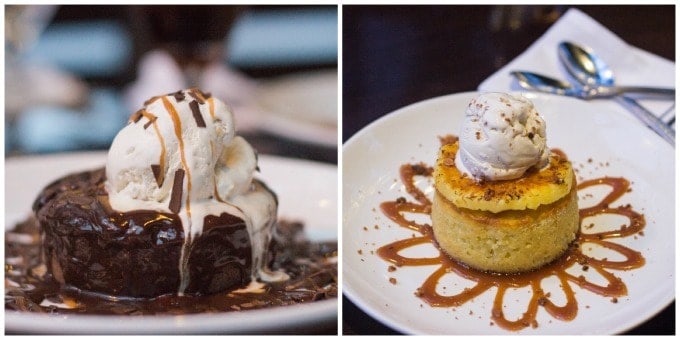 Bonus Dish #3 & #4: Molten Godiva chocolate cake a la mode (MJ wouldn’t have it any other way) and a Pineapple Upside-Down Cake (a childhood favorite of mine)

Truth be told, we were both so stuffed at this point, we could only manage a couple of bites and had to pack the rest for later. As we interacted with Ryan throughout the evening, it was clear that the service excellence and passion for food was starting at the top and permeating through the rest of the staff. He could have left us in the hands of the more-than-capable Abby, but he helped serve and checked up on us for a good portion of the night. Thanks again to Ryan and the entire crew at Foxhole Culinary Tavern for treating us to such a special night!

If you live in North Austin and haven’t experienced the deliciousness of Foxhole Culinary Tavern, don’t put it off any longer. And even if you don’t live up north, it’s worth the drive. Trust us! Live music, a variety of drinks, stellar food…do you really need more reasons?